So my work regularly takes me to New Orleans and though I’ve pretty well stayed away from most of the celebrity chef restaurants in lieu of smaller, local places, I was prompted to go to K-Paul’s at the suggestion of Chef Adolfo Garcia of RioMar. As would be expected from the suggestion of a chef, I was not disappointed. 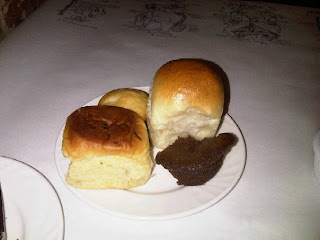 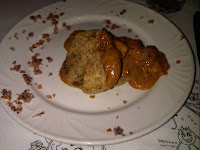 As a starter I ordered the Fried Green Tomatoes with Shrimp Caper Dill Remoulade. This was a phenomonal dish. Having lived in the South for a while and being married to a Southern girl, I am quite fond of fired foods in general and fried green tomatoes in particular. This was not a version that disappointed. The chiptole remoulade was nice and contrasted well with the cornmeal batter and the tomatoes were perfectly fried.

Fresh Drum Fish From Louisiana Waters Seasoned and Blackened in a Cast Iron Skillet and Served with Drawn Butter, Potatoes and Veggies 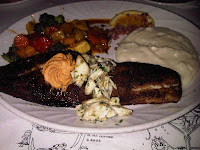 As I had mentioned, the blackstrap molasses muffin was so good I instantly devoured it. My attentive server noticed how much I had enjoyed it and brought me another four, so many in fact that I had some to take back to the hotel with me.

K-Paul’s Louisiana Kitchen is located in the French Quarter of New Orleans at 416 Chartres Street. It is one of the of the classic New Orleans restaurants and though Chef Paul Prudhomme may no longer be in the kitchen, the cooking still does his name justice. I’d highly suggest checking it out if you have the opportunity.