Here’s our second review for the June issue of David LV magazine about Sen of Japan!

Let the Sushi Masters Lead the Way at Sen of Japan

I’m a sushi addict but this wasn’t always the case. There was a time when eating most seafood was unthinkable. Growing up south of Chicago didn’t exactly provide me with a plethora of choices for fresh seafood, with options limited to McDonald’s Filet-O-Fish, the weekly fish fry at the American Legion Hall and sticks of the Gorton Fisherman variety.

Luckily, I ended up on the West Coast, where we are blessed with ample opportunities to indulge in seafood, particularly sushi. If you’re looking for the top sushi, and you should, head to Sen of Japan, where they’re serving up some of the best raw fish in town. (And, in case you didn’t know, sushi is safer to eat than chicken, according to the National Academy of Sciences Institute of Medicine—and who are we to argue with them?)

Sen, as it’s known to regulars, is a neighborhood staple, and perhaps the top sushi in Vegas, providing the highest quality for the money. That said, Sen is not a discount meal, but you will walk away feeling the experience was well worth the cost.

Inside Sen, the feeling is contemporary, with a calming serenity. Seating is available at both the sushi bar and at tables in the dining room. I’d suggest that if you’re in a group of three or less, sit at the bar where your dining experience will be more animated and service tends to be more responsive. If you’re more than three, you’ll want to get a table because it will be much easier to carry on conservations.

A little secret about the local scene: many of our sushi restaurants are operated by Koreans. This is not the case at Sen, whose owners are both Japanese natives. Chef Hiro Nakano is an alumnus of the Hard Rock Hotel’s famed Nobu and Shinji Shinchiri was head sushi chef at Bellagio’s Shintaro (now Yellowtail), where the two met. This pair creates one of Vegas’ most authentic Japanese dining experiences.

Nobu is the Las Vegas outpost of the now international restaurant empire of celebrity Iron Chef Nobu Matsuhisa. His restaurants are arguably the most popular, high-end Japanese restaurants, known worldwide for their scene and delicious, albeit expensive, Japanese fusion cuisine and sushi that combines traditional Japanese and South American ingredients.

If you’ve never tried sushi, begin with the nigiri the hand-pressed sushi made from rice, a dab of wasabi and a topping. The nigiri offerings are plentiful and Sen only serves what it can get fresh. Good choices for the neophyte include sake (salmon for $4.25), maguro (tuna, $4.85), saba (mackerel, $4.25) and tamago (egg cooked with sugar and attached to the rice with small band of nori, $3). You’ll be happily surprised with your first bite. Fish such as maguro and saba don’t actually have a fishy taste, and some have even likened maguro to beef. The vinegared rice is tart on the tongue and the wasabi, in sufficient doses, instantly clears your head of any stuffiness. It is the combination of these varying flavors that ultimately creates the ethereal taste in every bite of sushi, and that is why we love it.

More adventurous items include aji (Spanish mackerel, $5.25), toro (a fatty cut of tuna, market price) and foie gras ($18). These can be served straight or with a variety of special sauces—the chefs will provide you with good direction as to how each is best served.

Once you’ve gotten comfortable with using the rice as training wheels, it’s time to move on up to sashimi, thin slices of fish served with a dipping sauce and condiments, usually soy sauce and grated ginger or citrus-based ponzu sauce.

You also can get Americanized rolls, such as the Philadelphia roll (smoked salmon, cream cheese and cucumber, $5.30) or aptly named caterpillar roll (eel and cucumber roll draped with avocado, $13) that looks like the colorful insect. But, I suggest sticking with more traditional Japanese offerings or letting the chefs guide you to some of their house rolls, such as the No. 1 ($14), a spicy tuna roll draped in tuna and drizzled with a spicy garlic ponzu sauce.

Nobu’s influence is found in some of the more popular dishes. The garlic yellowtail sashimi ($14.75) is thinly cut yellowtail with cilantro, serrano peppers, freshly ground and lightly fried, sliced garlic and a yuzu-soy sauce. The yuzu-soy sauce’s saltiness and tartness compliment the sharp flavors of the serrano peppers and garlic, while the texture of the fried garlic contrasts with the yellowtail’s inherent softness. The comingling of the multiple flavors and textures results in sublime harmony in every bite.

If you’re still not sold on the idea of putting something uncooked in your mouth, have no fear—Sen has cooked dishes, too. One of the best is the white tuna with jalapeno sauce ($16.75), successfully providing a bite of heat while not overpowering the delicate fish. Black cod soy ($13.75) is another hit, with cooked fish so buttery it just melts in your mouth. It can be ordered as an entrée or wrapped in butter lettuce leaves as a small taste. Either way, you get a Nobu-type taste without the associated price (a similar dish there, the black cod miso, runs about $23).

When my wife and I dine at Sen, we normally do an impromptu omakase menu, which translates to “entrust,” meaning the chef decides what to serve. It’s dining on autopilot, if you will. This method of ordering is so common in Japanese restaurants that it is on Sen’s menu with two options: a $55 per person condensed version or an $85 per person expanded offering, with an additional course and more intricate dishes.

No matter what you try, don’t forget to pair your meal with any of the wide variety of sakes that are available. Our favorite is the Dewazakura Dewasansan ($19 for a carafe), which nicely complements just about anything on the menu, though you can never good wrong with a Kirin or Sapporo, both traditional Japanese lagers.

By the way, oishii is Japanese for “delicious”, a compliment the chef always likes to hear.

Check out the link to our first article in the Las Vegas Weekly!

Additionally, more content coming shortly with the publication of our David LV reviews! Thanks for being patient as we begin to give you more ideas on great places to eat and drink!

Now maybe the sight of a food truck in the Smith’s parking lot on Buffalo and Flamingo may not seem like a big deal to most people, but it was enough for me to do a 180 while heading home on Monday. There it was…the Slider Truck! Though I had already had lunch, I knew I had to check out what was going on.

As all of my friends know, I am a huge food truck fan. I love to visit cities with actual food truck scenes. Our recent weekend in Austin, where by some statistic from the Interwebs there are over 1,000 authorized food trucks throughout the city, was heaven. One night we specifically tracked down dinner from the East Side Kings and gorged ourselves on roasted pork belly buns, fried brussels sprout salad, ginger garlic jasmine rice and curry buns. That was after a previous late night stop on the way back to the hotel at Bar-B-Que Heaven where we got a combination sandwich of chicken, sausage and beef – probably not the best meal before settling in for the evening but OH SO GOOD! 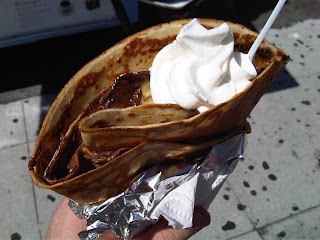 The food truck scene is also big on the west coast in both LA and Portland – it really seems like the whole West Coast has embraced this movement without us. Heck, I had a great Nutella and banana crepe in San Francisco from Creperie Saint Germain in SOMA.

I’ve never understood why we could adopt the sprawl associated with LA, while ignoring the good stuff such as the food truck scene. Needless to say, stories of Kogi make me cry out of jealousy. So imagine how refreshing it was to hear that Kogi was part of the inspiration for the Slider Truck – maybe our time has come for a food truck scene to compliment our high-end dining.

The staff were personable as I approached not knowing what I wanted to order. The owner Ric Guerrero even came out to talk to me a bit about how they started things and what their plan was. He even made some suggestions as to what to order, but that was the easy part because at $3/piece ($2 for the standard super slider) I ordered one of everything – a $11 meal for 2!

That day the Slider Truck was serving a pulled pork slider, a kalbi rib slider, the Pep Pep and the super slider – both of which were Angus sliders. The pulled pork was by far and away our favorite, though that it not to say the others weren’t really delicious. It was just THAT good and my wife quickly laid claim to it.

The kalbi slider was a bit tough to bite through (as kalbi is apt to be), but the grilled cabbage and sesame seeds were a nice contrast in flavor and texture and overall it was delicious. The Pep Pep and the super slider were very similar to one another, made of tasty Angus beef and cooked perfectly, with the addition of the bacon and the super sauce (think Big Mac special sauce) differentiating the Pep Pep from its smaller sibling. In all instances, the buns were grilled to perfection – the skilled handiwork was readily apparent.

It was a great meal – my only suggestion would be that the snacks sold alongside the sliders be of comparable quality to the burgers themselves. These burgers deserve to be paired with snacks worthy of their company, not common pre-packaged stuff, though I understand being a new endeavor this may not yet be an option. With that said, that will not stop me from coming back.

The menu appears to be continually changing in its infancy as new specials, as the Slider Truck had only been around for a couple of weeks. Be sure to follow them on Twitter @SliderTruck or check out their website – http://slidinthru.com/ as their success can only lead to spawn more food trucks throughout the Valley.

Here’s hoping that Slider Truck can help spur the birth of the Vegas food truck scene, as it’s something that we deserve as our food scene matures. We can only hope that, in the immortal words of Vince Vaughn in Swingers, “Our little baby’s all growns up!“.